Volunteering At HARDROCK 100 – Better to Give

Top of the HARDROCK 100 Course

Last weekend I had the most amazing time at the Hardrock 100 in Colorado. While my goal is to run the race one day, I wanted to share my experience with the hope that it may inspire you or a friend to take time and volunteer at a race…You may think that you are only giving your time, but you may be surprised at what you get in return.

Where It All Started

When my good friend, Bobby “Goat” asked me to pace him for the last 40 miles of his first 100, I thought he was nuts. I had never run more than 26.2 miles, but he was convincing and assuring me that we wouldn’t be running fast and would probably be doing some walking. It was a memorable experience and the beginning of my passion for running ultras.

It definitely wasn’t the distance that was appealing. Although I did enjoy running in the woods and being surrounded by His creation, the primary motivator was the people. The runners, pacers, family, friends, and all the volunteers made this experience so special that I wanted to be a part of it. I experienced a community that had a passion for running and for supporting others who pushed their bodies to the limit.

Since then, I have enjoyed helping out at other races and pacing friends (I previously shared about my pacing experience here) but none have been as motivating as that first Mohican 100. However that all changed last weekend at Hardrock!

When I found out that I had a business trip in Sedona, AZ (the weekend before the Hardrock) the wheels started turning. Hardrock is one race that I have always wanted to run ever since I heard about it when I began running ultras. Unfortunately the odds of getting in are extremely low with only 45 “first-timer” spots for over 1700 entries. As a result, I thought it would be cool to be a part of the event, not to mention I needed 8 hours of volunteer time for the Grindstone 100 in October. After speaking to my wife Alison, I got permission to spend the weekend in Colorado.

I e-mailed Brad Bishop, the Hardrock aid station director, and after a few e-mail exchanges, he offered to let me help out at the Sherman aid station on the first day and work with the communications team on the second day at headquarters. I was excited and despite a 7-hour drive and no idea where I would camp, I was heading there to be a part of the action.

Exhausted after driving through the night, I arrived just before the start to see many of the top athletes I have followed begin the race. I had been instructed to head over to a building close by to pick up drop bags for the Sherman aid station. While waiting, I was asked to help pack coolers, and was amazed at the level of organization that took place behind this well oiled machine. From the detailed inventory list for each aid station, to the neatly organized frozen soup, pies, and other food packed in freezer after freezer, I had no idea what went into being able to feed 140 runners and many others for the next 48 hours.

The sketchy drive over Cinnamon Pass to get to Sherman Aid Station was a hair-raising adventure, but I’ll save that story for another time. It was the next 11 hours that was one of my main reasons for writing this post.

When I arrived at Sherman, many volunteers were already in the process of setting up chairs, tables, and tents, so I jumped right into to see where I could help out. It seemed like a typical aid station at first, but I quickly learned that this group took things to another level.

Scented candles in a composting toilet in the woods

To begin with, the bathroom is covered with inspirational quotes, more toiletries than you would find at any outdoor bathroom, and other supplies that must have made the runners who stopped very grateful. The food menu was extensive and included smoothies, quesadillas (w/ bacon, chicken, potatoes, or avocados), pies, soups, and so much more for everyone from carnivores to vegans. The list of items were placed on signs with inspirational messages on the trail leading into the aid station to motivate runners as they got close.

Martha has been the aid station captain here for several years and she had everything running smoothly. She gave me and the other rookies I had met earlier, Joe and Chadwick, a warm welcome that included some nice Hardrock shirts. Most of the volunteer crew here have known each other for years and many have worked this aid station for over 5 years. The group worked together like a true team and prepared for the runners that were expected sometime after 11am.

All “Hail” The Runners

Since Hardrock changes direction each year, the distance of the aid stations do as well. Sherman aid station is at either mile 28.7 or 71.9, which can obviously impact the needs that runners may have. Given that we were at the shorter distance this year, I wasn’t sure how much help runners would need after 28 miles, but I waited with everyone else for the first runners to come in.

At around 11:45a, Kilian Jornet arrived, looking as if he just started his run a few minutes earlier. Little did any of us know that almost 14 miles earlier, he had fallen, dislocated his shoulder, put it back in, and continued on. Despite an accident that would cause many runners to DNF, those of us at Sherman couldn’t even tell he had fallen given how he looked and acted. After causally leaving, other runners who I have followed began to trickle in, including Mike Foote, Caroline Chaverot, Joe Grant and many others.

Within an hour after the first runner, the skies darkened, the temperature began to drop, and lightning and thunder was accompanied by some rain and hail. In camp, the hail didn’t seem too bad, but that was clearly not the case higher up on the descent into Sherman.

One runner I had the opportunity to help early in the storm was Karl Meltzer, who has won more 100’s than anyone. Like all the runners, he thanked us for being there and our help. I know Karl is generally self-sufficient, but I did my best to help get him soup and warm up as everyone was wet and cold.

The Sherman Rookies, Joe, myself, & Chadwick

As more runners started pouring in, the aid station crew began triaging the runners amongst one another. We would grab their drop bags, fill their bottles, and see if they wanted food or needed help. There were stories about how some hid under bushes and trees to avoid the hail, while others had welts on their necks, arms, and legs, but almost everyone was shivering and trying to get warm. The volunteers were amazing as I watched some take disgusting socks and shoes off runners, clean and dry their feet, and help them into dry socks or clothes. They were going above and beyond, and the runners clearly appreciated it.

It was amazing and so much fun to see runners come in to Sherman struggling or frustrated, only to see them often leave smiling and re-energized. Although it was only mile 28.7, I am confident that it was the awesome volunteers at Sherman that allowed every runner that came here, leave and head to the next station: Burrows Aid Station.

Just Another Reason to Love this Sport

It wasn’t just volunteers helping the runners that was so cool to watch and be a part of. It was awesome to watch runners offer help or support to other runners. It is the kind of camaraderie that I believe is unique to ultrarunning. The passion many have for this sport isn’t about competing with others over the enitre distance, but about the experience, the challenge, the love of nature, and the chance to support one another in the process.

I saw this at the Sherman aid station, but also at the finish line. It was awesome to watch Kilian round the corner with his arm in a sling and win his 4th Hardrock. We all cheered while being in awe of this amazing accomplishment. After his interview, Kilian went inside as the rest of us anticipated the second place arrival of Mike Foote. We all cheered again as Mike kissed the rock (something all finishers must do) and began interviews. Surprisingly Kilian came back out in his sling to take pictures of Mike and congratulate him, in show of true sportsmanship. However, it doesn’t stop there as Kilian was back at the finish line 24 hours later, waiting for the last finisher of Hardrock to come in to congratulate him and the second to last finisher who took almost 48 hours to finish. 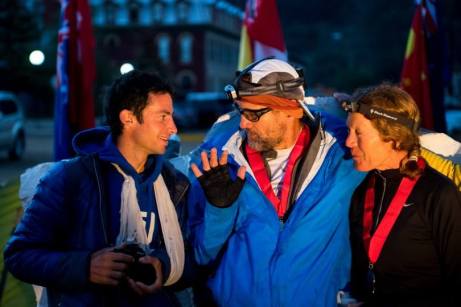 I was fortunate to see many runners finish as I worked at headquarters. I was responsible for tracking runners as they came in and often stepped out to see them and all their emotions from being elated, to exhausted, to overwhelmed. Seeing so many runners finish such an amazing race was truly humbling yet inspiring.

The entire experience last weekend rekindled the passion for this sport that seems to have been on a decline for me. I love running trails over long distances, but do I need to travel and sign-up for races to do that? The answer was easy after last weekend. I am so excited to line up for my next race, the only course I have yet to finish, the Grindstone 100 in Viginia on October 6th.

Although I went to Colorado with the intention of just getting my volunteer hours in, watching amazing athletes, and checking out some of the course, it gave me so much more. I have no idea if I will ever get into Hardrock as a runner. While that is my ultimate goal, it would be awesome to get back there to work with the Sherman aid station team, and to be a part of the magic that makes Hardrock more special than I had ever known.

The course is absolutely beautiful

I am a Christian, Father of 4 wonderful children, Husband and Passionate Runner. I hope to help others experience that running can be a powerful approach to strengthen their Faith and improve their fitness.
View all posts by rxnickrun →
This entry was posted in Acts, Challenging, Goals and tagged Faith, fitness, hardrock, Kilian Jornet, Sherman, Ultra, ultra running, Ultramarathon. Bookmark the permalink.