A man may have many plans in his heart. But the Lord’s purpose wins out in the end –Proverbs 19:21 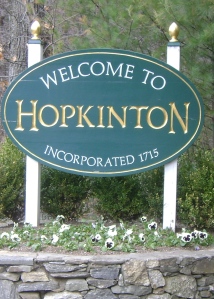 The Boston Marathon is a race like no other and holds a special place for those of us who enjoy the pain of challenging our bodies over 26.2 miles. It is rich with history and the need to qualify with difficult times make the “BQ” (Boston Qualifying time) a goal many pursue and few achieve.

The running community and the world were shocked last year as this beloved race turned into a war zone that resulted in deaths and countless injuries. I had been on the phone with my friend David who had finished the race when one of the bombs went off. Fortunately David was safe but many others were not as fortunate.

It wasn’t long after those horrific attacks that I decided I would show my support by making an unexpected return trip to “The Marathon”. It was a race that I had never wanted to run again after my 2010 experience. Four years ago I had planned to run for fun after finally breaking 3 hours only 4 weeks earlier at the Virginia marathon. We had great weather on race day and I was running strong through mile 15 when I ran into Josh Cox, American 50k record holder.

Josh had paced me at the 2006 New York Marathon and that experience, a YouTube video that Josh narrated (click here), and many other events in my life seemed to come together at the 2010 Boston. It was in this race that I felt God’s presence in a way that is hard to explain. Later that year I started Doylestown Christian Runners based largely on that experience. There is much more to my experience in Boston that day but it left me feeling as though I never wanted to go back.

That was until I decided to sign-up for Boston again this year. I hoped that in doing so I could be a part of something special as everyone ran, cheered and watched the race to honor those who were killed or impacted by the attacks. 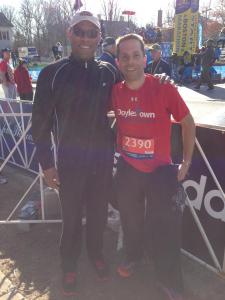 Hanging out with Mark before the race

I signed up in September but it was probably in late January that the pressure began. I am the type of runner who needs a race on my calendar to get up out of bed and train. In doing so for Boston this miserable winter, I slowly began thinking about what time I would like run on April 21st.  While training was far from perfect, and most of my speed work was done on a treadmill, I was shocked when I ran a new 5k personal best in my first race of the year on a freezing morning. It was 5 weeks out and the confidence was high for another strong performance.

These expectations were soon dampened after I developed a fever. After being sick for 4 days and failing one course of antibiotics, I was eventually diagnosed with pneumonia and reluctantly put on Levaquin (not a runner’s choice of an antibiotic for fear of Achilles issues). The end result was I didn’t train for almost 12 days and was struggling to get well as my taper was supposed to start.  If that wasn’t bad enough, I developed a cold in the days leading up to the race and kept telling myself to remember that I was doing Boston for reasons more important than a time goal.

It was perfect day to race and there was a special feeling with the runners, spectators, and volunteers. I was with my good friend Mark who fortunately lives close to the start. He and I got to see Dick and Rick Hoyt as they took off on their last Boston Marathon. They have inspired me and so many others. It was great to stay and relax with Mark in the hours leading up to the race but the 10am start time came quickly.

I was unsure what to expect once I started but decided to run on feel and was amazed at how good I initially felt. The girls at Wesley screamed for kisses as usual and brought a smile to many of the runners who loved their enthusiasm (although I rarely saw anyone take them up on their offers). It is the passion of these girls and so many other spectators on this course that makes Boston so special. 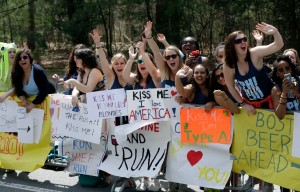 The girls at Wesley provide lots of motivation

By mile 15 I was losing steam and my pace was slipping significantly. As I started the climb up Heartbreak Hill, I stopped looking at my Garmin and tried to enjoy the experience. At first I was mainly high fiving the crowd and encouraging other runners as we made our way towards Boston College. I then took this new approach to a new level as a bunch of college kids were offering free beers. Unlike most guys my age, I would easily choose a piece of chocolate cake over a beer. However something made me stop and chug a beer with the college kids.  I then took off in my Doylestown Christian Running shirt (I guess they knew I wasn’t an evangelical) worried that one beer, dehydration, and rising temps might not be a wise decision after all. However it tasted great as I continued to enjoy this amazing experience.

As I approached Columbus Circle around mile 23, another runner told me Meb Keflezighi had won –The first American to win in 31 years. This news propelled me to pick up the pace and get to Boylston Street to the awesome crowds and finish line.

Praying while I run or warm-up is part of my routine in the morning and before a race. I start by thanking the Lord for His love, forgiveness, and grace He so freely gives to us each day. The morning of the race I prayed for many individuals in my life and at the race. I asked that we all be safe and for the ability to thank the Lord through the good times and through the pain.  I was finding peace as the start of the race got closer.

Before heading to the start I stopped by a Lake near Marks house to check my phone one last time. Since Boston wasn’t allowing drop bags to be delivered from the start to the finish, I was going to have to run with it. As a result, I decided to check for any last minute words of encouragement and I was not disappointed. One of the most powerful messages came from Bob. It was so aligned with what I had just prayed to God about minutes earlier, that it made me smile to think how God never seems to surprise me in how He is listening. Among the many wonderful words Bob sent were these:

“Today is a gift and a Blessing for you, just as every day is a gift….Remember that there are times the Lord has you driving and other times he has you riding.”

He reminded me that this was a bigger day for some in the field than it was for me. We had friends who were there last year. Some who were physically injured by shrapnel and others whose scars were not visible. This powerful reminder was with me as I journeyed from Hopkinton to Boston.

I went to Boston to experience and be part of something special, and I was. I knew the challenges I faced during training would impact my performance, and they did. Most importantly, I know I am blessed to have finished, have the support of family and friends, and have had a chance to honor those who were killed or injured there last year by running.

I am a Christian, Father of 4 wonderful children, Husband and Passionate Runner. I hope to help others experience that running can be a powerful approach to strengthen their Faith and improve their fitness.
View all posts by rxnickrun →
This entry was posted in Doing our best, Prayer, Proverbs and tagged Boston Marathon, Faith, fitness, God, Marathon, Prayer, running, Ultramarathon, Ultrarunning, western states. Bookmark the permalink.